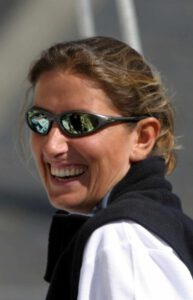 Dee started her career as a secondary school PE teacher before moving into the world of sailing, joining the Global Challenge Round the World Race in 2004/5. In 2006, Dee became the first solo female to circumnavigate the globe, non-stop, against the prevailing winds and currents.

In 2009, Dee became the first woman to circumnavigate the globe, single handed, non stop both ways. Later that year, Dee and her all-female crew broke the world record for sailing around the Britain and Ireland. Then in 2011, Dee completed the Barcelona World Race. She remains the only woman to have circumnavigated the globe, non-stop, three times.