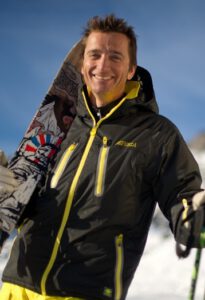 Five time Olympic skier turned TV presenter, adventurer and journalist, Graham Bell is the face of the BBC’s Ski Sunday as well as a successful commentator and sporting pundit. Until recently Graham held the prestigious title of International Performance Director for The Ski & Snowboard Federation and is a patron of The British Ski Academy. Graham was also a significant member of the board of SnowsportGB and the Olympic committee.