Top British comedian and presenter of the popular BBC TV series Restoration, Griff Rhys Jones, took on sailing celebrities Laura Baldwin and Phil Sharp and actor Geoffrey Hughes last week in a pro celebrity race at Cowes as part of the British Classic Yacht Club and Spirit Yachts Regatta. Whilst raising awareness for Sail 4 Cancer, the race was also highly competitive, as Griff Rhys Jones has a passion for sailing and was keen to give the young professional sailors he was pitted against a good run for their money!

Geoff Hughes (best known for his roles as Twiggy in The Royle Family and Onslow in Keeping Up Appearances) is also a keen sailor, though confesses he doesn’t spend nearly enough time on the water these days. Like the other three celebrities he was delighted to help Sail 4 Cancer in their bid to improve the quality of life for those living with cancer.

All four competitors were allocated a classic boat each, though Griff had the added advantage of helming his own classic yacht, Undina, a Philip Rhodes 45ft which he has lovingly restored himself, whereas the other three found themselves in unknown territory on boats they had never sailed before.

Conditions were far from perfect as the four contenders crossed the Royal London start line; sharp gusts of wind up to 30 knots and a strong spring tide meant that all the boats were sailing at hull speed down to the first mark in danger of broaching at any moment! All four boats were almost overpowered by the conditions, as their rails were buried deep in the Solent chop.

Offshore sailing hero, Phil, helming ‘Strega’, finished first, completely awestruck from his first experience of helming a Spirit 37, and claimed he had ?surfed a classic yacht, on the very edge of control! Griff came a good second, admitting that after a lifetime spent cruising, he has only relatively recently started racing and still finds it a little unnatural not just taking the safest course. He felt he had learned a huge amount out on the water, but was glad to get back to the pontoon with no damage to his well loved boat!

Laura came in in third place, having been surprised at how maneuverable her International 5 Metre, ‘Sensa’, had been after her familiar Laser Radial. Geoff was utterly delighted helming the Philip Rhodes 45, ‘Josephine’, claiming it was:

“Like letting a kid loose in a sweet shop!”

Sadly conditions were worsening and the afternoon’s race had to be cancelled, so the return ‘grudge’ match was out of the question, but then again everyone had plenty of time to make themselves beautiful for the Pimms Reception to be hosted by the Royal London Yacht Club in the evening. Local artist Michael Frith kindly donated two of his stunning paintings, which were auctioned off during the evening to raise more funds for Sail 4 Cancer, as the Pimms flowed freely.

The British Classic Yacht Club Regatta is always a spectacular event, with so many fine-looking boats out on the water. Sail 4 Cancer has been chosen as the official charity for the event and any funds raised will be used to help improve the quality of life for those living with cancer.

The charity would like to thank Cornelius Van Rijckevorsal, Sandy Fielding, Tim Blackman and of course Griff Rhys Jones for risking their beautiful classic boats out in the Solent last week. 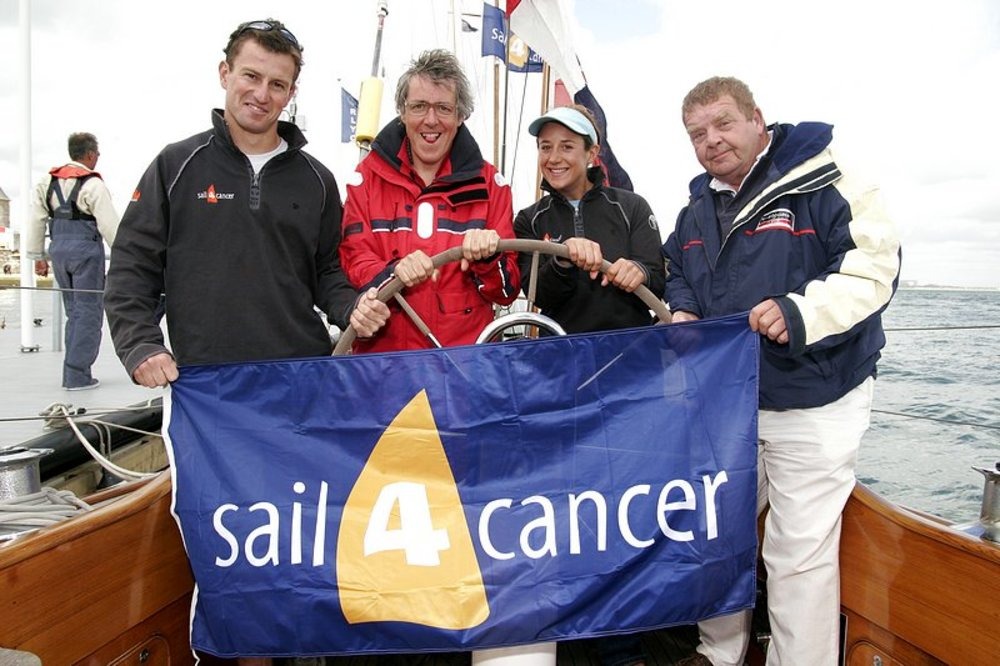